It's been a 2 weeks wait. The telephone call finally came this morning. When I recognized the voice at the other end, I greeted her with a voice aplomb of self confidence. But in truth, I was nervous and faint hearted for fear of bad news. So the brave front was actually borne more out of a need to disguise this shortcoming.

The lady at the other end of the line jested when she asked which news I wanted to hear first. The good or the bad? Ooops! Not good. Not good at all. I thought about it for a nanosecond. Then it hit me. Waitaminit, waitaminit. Her statement laid the grounds of the possibility of bad news but yet, it reeked with the hint of good?

And so it was with good news that my new week awoke to. That come forth the new month of February, I shall be setting off on a new journey for myself and my life. A path where I will finally get to answer and serve the Lord's calling. As Soo Choo, my friend and soon-to-be new colleague would echo, "HIS KINGDOM COME. HIS WILL BE DONE."

So now it's cast in stone. A new milestone in my life will be marked. A new career with a new direction and new benchmarks. I have spent almost two decades of my working life in the private sector doing things and acquiring knowledge, which for the most parts may probably not have any bearings on my new vocation. Taking that into consideration, and in discounting those unneeded tools from the equation, I now have to believe that it is the remaining few skills left in my possession that will have a practical usefulness on how I navigate the waters of this new and alien territory that I chart. Mien Gott, the Lord has surely gone about preparing me for this task in a funny but wrong way. Hmmm... I may well be forgiven if I accused Him for deliberately designing humour for His own pleasure at my expense. That also loosely translates to saying that our God is a bona fide joker. That He laughs heartily at the end when He discovers that He has excelled Himself when He successfully pulls off certain stunts on His servants.

Heh! But I too jest when I wrote the above. Maybe it's the warped sense of humour that some say I have but as I reflected on those very same words at the second reading, it did dawn upon me that it was funny. At the same time, it also simultaneously occurred unto me that maybe I may have read Him wrong. Maybe God was not the joker I had made Him out to be. Maybe this time He did the reverse? That He inverted the position. That this time He had sacrificially assumed the mantle of comedic clown for my pleasure instead; albeit, one where His ulterior intent for me is good.

Puzzled??? Here's why I thought what I thought and it goes like this.

Maybe God wanted me to experience all of what I've experienced in my life, thus far, to adequately prepare me to assume my new role in the overall big picture. And the greatest lesson He had willed for me out of this exercise was to learn not to lament on my journey of the past but rather, to happenstance on the understanding that it was all a pre-designed pathway to learning and understanding futility, and more importantly, to acknowledge and then to surrender to it. And when all of this is done, I am to then sit back and take in the simple joy of discovering how to laugh alongside Him at the oxymoronic idiosyncrasies that I had created for myself the last 43 years. At this juncture, I had another epiphany. For as I learn to laugh at myself in this process, maybe I may just be lucky enough to discover the godly grace that He means for my life and I.

Thank you for Your faithfulness, God, my Lord. I serve willingly in Your kingdom.

Amen.
Posted by millemeow at 11:21 AM No comments:

Found this article which was reported over on BBC news today. Unsurprisingly, not a whiff of it was heard over our local main stream media (MSM). Certainly not over Bernama, which I've checked just to be sure before I begin calling them monkey names again. After the police derailment of last Saturday night's solidarity candlelight vigil for the abolishment of the ISA, this is but yet another telltale sign that the ruling government is fearful of even its own shadow.


Malaysia has suspended the recruitment of workers from India and Bangladesh, amid rising domestic tensions.

A government official said the decision might be linked to the actions of a group that led protests complaining of discrimination against ethnic Indians.

But the official did not say why the decision had been made, nor how long the restrictions would last.

The ban will affect thousands of manual labourers as well as professionals, including religious workers.

There are currently about 250,000 legal workers in Malaysia from India and Bangladesh.

The move to freeze visas for all workers from the two countries was taken three weeks ago, the government said.

But Tuesday's announcement took many people by surprise.

A Vaithilingam, president of a Malaysian inter-faith group, said that the decision came without dialogue and was "unprecedented".

The BBC's correspondent in Kuala Lumpur, Robin Brant, said it was a significant diplomatic move by the Malaysia government.

A Home Ministry official told the BBC that the decision "may be linked to Hindraf", the Hindu activists group which organised recent rallies by Malaysian ethnic Indians.

Thousands of ethnic Indians took to the streets late last year in protest against perceived social and economic discrimination by the Malay-Muslim majority.

The announcement came on the final day of a visit to Malaysia by Indian Defence Minister AK Antony.

An unnamed Indian professional told Reuters that the Malaysian government should not have taken such a drastic step.

"They should recognise the contribution made by Indian workers and professionals in the economic growth of the country," he said.

Posted by millemeow at 8:15 PM No comments:

I read with great amusement today a report that was carried over on Malaysiakini. It was about the antics of a group of Malay youths. These young men, not unlike a great many of the rest of us in this country, were less than enthusiastic with the performance of that lame duck of a PM we have. Yes, that same one, who a few years ago wooed us all with a campaign slogan that shouted “Work With Me, Not For Me.” Somehow, back then we took him for his word. So imagine how disgusted my compatriots and I are now when we realised that we’ve been conned into voting for a buffoon like him. And to that lie he told us back then, I’ll just resort to the classic Lat cartoon gesture. Ptooi!

Anyway, since not all of us have access to Malaysiakini, I thought I’d reproduce the article here. But before that, let’s take a moment to salute this group of discerning young men and women who were not blind to the nonsense that the current BN administration is about. They got brass balls, they do. I salute you all! I really do.

A group of disgruntled young Malaysians today symbolically handed a ‘gift’ to Prime Minister Abdullah Ahmad Badawi to express their disappointment with his administration.

The gift was in the form of a yellow pillow and a bolster - both decorated with the Malaysian flag and the Petronas Twin Towers.

Abdullah however was not on hand to receive the items, which the group left at the doorsteps of the premier's office in Putrajaya this morning.

Spokesperson for the group Badrul Hisham Shaharin said he and his eight other friends had come to the conclusion that the government's ineffectiveness was due to Abdullah's purported "sleepiness".

He added that Abdullah had previously been allegedly caught nodding off at various official functions both locally and abroad.

“So we wanted to send a ‘memorandum’ about the what the youth wants. This memorandum is in form of a pillow... He can use the pillow to continue sleeping or wake up and realise that his administration is not efficient,” Badrul told reporters.

Badrul said the group consisted of artists, poets, bloggers, writters and activists but denied that the ‘pillow act’ was politically motivated.

The group displays posters mocking Abdullah over his alleged ‘sleepiness’. 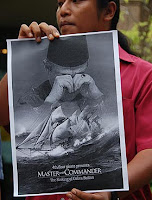 A poster referring to a 2006 report by Turkish newspaper Hurriyet regarding a luxury yacht allegedly linked to Abdullah.

“We don’t expect him to reply our ‘memorandum’. Thus far, he has never replied any memorandum sent by civil society groups,” Badrul told reporters. 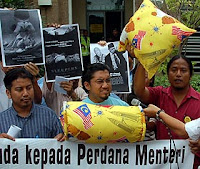 Journalists and the police were stunned when the ‘memorandum’ turned out to be a pillow and a bolster. 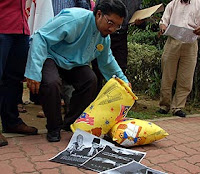 “He can come and pick it up later if he wants,” said Badrul. 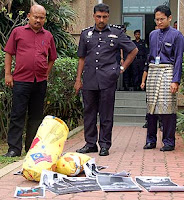 Baffled monkeys took a while to register what was before them before deciding how to deal with the items. 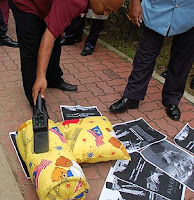 Posted by millemeow at 5:57 PM No comments: