On the first day of Chinese New Year, I posted a status message on Facebook, which offended a few people. This was my response in anger to an expose that was aired on the 1.00 P.M. news on telly that highlighted the plight of refugees' exploitation by Malaysian immigration authorities. I'll refrain from repeating the remarks I had made on Facebook (and I do sincerely apologise for having made those offensive remarks) but I will not stand down from protesting against the inhumane sufferings of these minority groups.

So for the benefit of those who did not catch the news clip back then and/or for those who do not have access to Malaysia Kini, I'm reproducing an article that was published on the latter today. Readers may then form their own opinions after this.

Like thousands of Burmese migrant workers That Zin Myint travelled overland from Rangoon to Bangkok and reached the Thai border where local syndicates, for a hefty bribe, helped him cross into northern Malaysia and move overland to the capital where cheap, unskilled labour is in great demand.

''Don't take my photographs... they will come after me,'' Zin Myint said, referring to Malaysian authorities who now closely monitor local and overseas publications for anti-Malaysia sentiments expressed by migrant work

On arrival Zin Myint 'celebrated' with others from his village and joined some three million - documented and undocumented - Asian migrant workers who live and work here in deplorable conditions.

An estimated 150,000 of these workers are Burmese migrant workers, many of them Kachins and Muslim Rohingyas from Burma's northern Rakhine region.

''We Burmese migrants are sold like fish and vegetables,'' Myint told IPS in an interview in Pudu market, a big wet market in the capital where Burmese migrant workers predominate.

Deported and sold to trafficked

Myint had been arrested, taken to the Thai border and officially 'deported' which actually means getting sold to human traffickers.

''I was robbed of all my cash by both Malaysian and Thai officials and sold to traffickers,'' said Myint.

''I was held in a jungle camp near the border for three weeks until my relatives bought me from the traffickers. I bribed my way back into Malaysia,'' he said, adding that while conditions are tough in Malaysia, they are better than Burma or Thailand.

Myint is one of the luckier ones to be arrested and 'deported' only once. He is now considered a leader in the Pudu area and much sought after by other Burmese workers for 'assistance' in avoiding arrest and deportation all over again.

Burmese migrant workers call the trade ''bwan'' (thrown away) or one of the worst forms of human trafficking.

''Malaysia does not recognise key international agreements on the protection of refugees and foreign nationals. Nor does it apply to foreign migrants the same rights and legal protections given to Malaysian citizens,'' said Irene Fernandez, executive director of Tenaganita, a rights NGO that protects migrant workers.

Human rights activists have long charged that immigration, police and other enforcement officials, including the unpopular voluntary force called Rela, have been ''trading'' Burmese
migrants, especially Rohingyas, to human traffickers in Thailand who then pass them on to deep sea fishing trawler operators in the South China Sea. The women are generally sold into the sex industry.

''They are treated as a commodity and frequently bought and sold and we have been condemning this practise for a long time,'' Fernandez said.

''Our demands have always fallen on deaf ears despite the accumulating evidence of the involvement of uniformed officials in the trade,'' said Fernandez.

It has become commonplace for the authorities to use the vigilante 'Rela' force to periodically arrest and 'deport' Rohingyas, but since Burma does not recognise them as citizens, the practise is to take them to the Bukit Kayu Hitam area on the Thai-Malaysia border and force them to cross over into Thailand.

''They are arrested, jailed and deported, but since they are stateless they are taken to the Thai border and often sold to Thai traffickers,'' said Fernandez.

Invariably, the ''deported'' Rohingyas bribe Thai and Malaysian officials and return to Malaysia.

The accusation against corrupt Malaysian officials is long standing and made frequently by refugees, human rights activists, opposition lawmakers and is even the subject of one official probe.

Malaysian television channels have also investigated and exposed the 'sale' of the Rohingya refugees on the Malaysia-Thai border, although they did not finger Malaysian officials for fear of reprisals.

US has sent teams to investigate

A US probe being conducted into the trafficking by the powerful Senate foreign relations committee has stimulated interest in the plight of Rohingyas when its findings are relayed to key US enforcement agencies and Interpol for possible action, Senate officials have said.

''US Senate foreign relations committee staff are reviewing reports of extortion and human trafficking from Burmese and other migrants in Malaysia, allegedly at the hands of Malaysia government officials,'' a staff official told international news agencies in early January.

''The allegations include assertions that Burmese and other migrants - whether or not they have UNHCR documentation - are taken from Malaysian government detention facilities and transported to the Thailand-Malaysia border,'' the official had said.

At the border, they alleged, ''money is demanded from them, or they are turned over to human traffickers in southern Thailand''.

''If they pay, they return to Malaysia. If not, they are sold to traffickers,'' the official said, adding that teams had visited Malaysia, Thailand and Burma to collect evidence on the human trade.

Some of the immigrants from Burma and other countries are refugees recognised by the office of the United Nations High Commissioner for Refugees (UNHCR) which has an office in Kuala Lumpur.

Since 1995, about 40,000 Rohingya refugees from Burma have been settled in the US, most of them after passing through Malaysia, while the emigration applications of thousands more have been rejected by third countries.

"They are left stranded, unable to return to Myanmar (official name for Burma) where they face certain persecution by the military regime and rejected from immigrating to third countries," said opposition lawmaker Charles Santiago who has raised their plight in parliament.

"They need urgent help and understanding of their plight," he said, urging Malaysia to sign UN refugee conventions and accord refugees due recognition. "We can no longer close our eyes to their plight."

''We are trapped in a foreign country without papers and without recognition,'' said Habibur Rahman, general secretary of the Myanmar Ethnic Rohingya Human Rights Organisation Malaysia, an organisation that speaks for stateless Rohingyas in Malaysia.

''We have been looking for a way to escape this dilemma but without success,'' he said.

''We are denied citizenship and made stateless by the Myanmar military junta and persecuted and forced to flee to neighbouring countries like Thailand, Malaysia and Bangladesh,'' he said.

The involvement of the US Senate in the issue has upset Malaysian officials who have warned the U.S. to ''take their hands off'' the country, saying such action violated Malaysian sovereignty.

However, Prime Minister Abdullah Badawi has asked the US to pass on information pertaining to the allegations, saying the government does not tolerate extortion from migrants by officials.

''The US authorities have evidence we would be very thankful for, if they can pass the information to us for investigation and appropriate action,'' he told Bernama, the official news agency, on Jan 15.

An upset foreign minister Rais Yatim told local media on Jan 19 that the allegations were ''baseless, ridiculous and farfetched''.

''We are a civilised country. We are not living in barbaric times when people are sold off at the whims and fancies of people with power. It is certainly unfair of the US Senate to accuse us of doing such outrageous things,'' Rais said.

Posted by millemeow at 2:05 PM No comments: 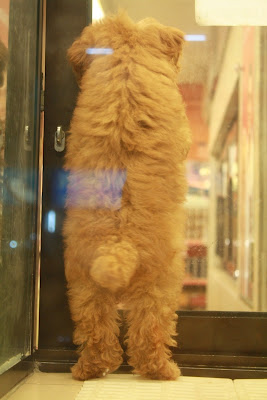 Will another still be open for me?

Pray. Just pray.
Posted by millemeow at 1:27 PM No comments: